Receiving average rankings in four of the five categories, Iowa's population growth, diversity and an uncompetitive tax climate continue to be challenges. As top business leaders evaluate the state's landscape, creating a future ready workforce, connecting business with education and attracting a more diverse population will be critical to long-term economic prosperity.

"Iowa is in a strong financial position. Over the last year, the state experienced a solid gross state product figure, a budget surplus and low unemployment," IBC Chair Mary Andringa of Vermeer stated. "But we know that for businesses to continue to thrive, we need an expanded skilled workforce. As the Iowa Business Council tours the state with this data, we will be working with communities to better understand their current challenges and asking them to join us to both upskill their current population and create a welcoming environment for new Iowans."

All the metrics included in the report can be measured consistently across all 50 states, providing an accurate depiction of how Iowa is competing nationally. Each indicator consists of five metrics that are averaged to determine Iowa’s overall performance in that category – competitive, average, or poor. These five metrics are then averaged to determine an overall ranking for each indicator which include: economic growth; workforce and education; governance; health and wellness; and demographics and diversity. The report also includes recommended actions that IBC members developed to help the state improve in each category.

The dashboard, which has been released since 2011, serves as a tool for policymakers, business and community leaders in making sound decisions. IBC members encourage leaders to join in implementing the report's recommendations or to develop their own action items based on the report’s data.

Iowa Business Council members span all 99 counties and provide a significant economic and philanthropic impact throughout the state. In 2019 IBC members:

Select findings from each section of the 2020 report include: 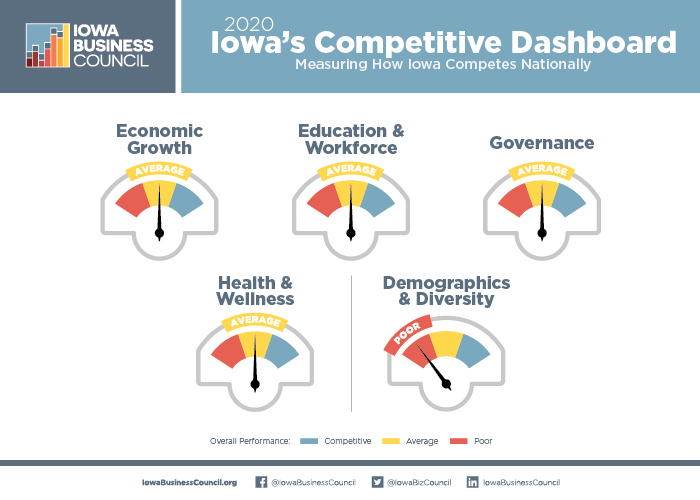