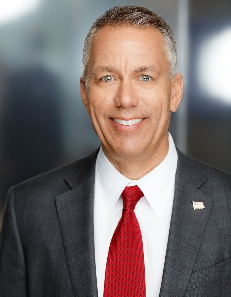 Darren Rebelez is the President and Chief Executive Officer of Casey’s General Stores, Inc. in Ankeny, Iowa since June 24, 2019.  He brings a wealth of experience as a senior executive in the convenience store and restaurant industries, most recently serving as the President of IHOP Restaurants, a unit of Dine Brands Global, Inc., which franchises and operates restaurants under the Applebee’s Grill & Bar and IHOP brands.  Prior to joining Dine Brands, Darren was employed by 7-Eleven, Inc., a convenience store chain, as Executive Vice President and Chief Operating Officer.  Before 7-Eleven, Darren held numerous management roles within ExxonMobil, and before that, at Thornton Oil Corporation.

Preceding his civilian career, Darren was an Army Ranger and Gulf War veteran.  A native of San Diego, he is a graduate of the U.S. Military Academy at West Point where he earned a Bachelor of Science degree in Foreign Area Studies.  He went on to also earn an MBA from the University of Houston.

Darren serves on the Board of Directors of Globe Life, where he is the chair of the Compensation Committee. Globe Life is a financial services holding company specializing in life and supplemental health insurance for middle-income Americans.  He also serves on the advisory board of Children of the Fallen Patriots organization which provides college scholarships to children who have lost a parent in the War on Terror