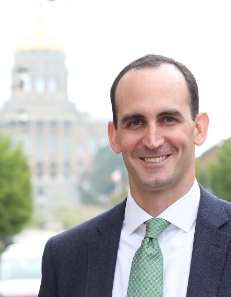 Joe Murphy is the Executive Director of the Iowa Business Council. In this role, he leads an organization comprised of CEOs and top executives from the 22 largest employers in Iowa. The Iowa Business Council serves as a catalyst to elevate Iowa’s long-term economic vitality through global thought leadership, research, and advocacy.

Joe has over a decade of government affairs, political advocacy, and public relations experience in both the public and private sector. Prior to his role at the Iowa Business Council, Joe served as the Senior Vice President of Government Relations and Public Policy at the Greater Des Moines Partnership. While at the Partnership, Joe helped organize efforts that resulted in significant legislative achievement in the areas of tax reform, workforce development, and infrastructure investment.

Joe earned his bachelor’s degree in economics from the University of Northern Iowa. He received a master’s degree in public administration focusing on public policy from Drake University. He is also a graduate of the Iowa Association of Business and Industry Foundation’s Leadership Iowa program.