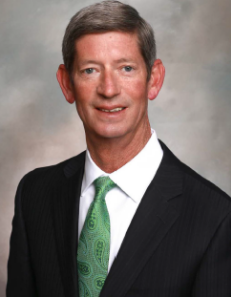 MHN and its two owner-members own and operate eight medical centers and other services in six major markets in Iowa – Clinton, Des Moines, Dubuque, Mason City, Sioux City and Waterloo/Cedar Falls – and community hospitals in seven other locations. In addition, MHN has 26 affiliated organizations that participate through contracts for management and other services, and one joint-ventured surgical hospital in South Dakota.  MHN includes more than 3,200 licensed hospital beds, more than 17,000 colleagues, and a Mercy Accountable Care Organization recognized as one of the most successful ACOs in the nation.

Prior to beginning at MHN on July 1, 2017, Bob served as President of Mercy Medical Center, an 802-bed acute care, not-for-profit Catholic hospital situated on three campuses in the Des Moines metro area.  In this role, he helped develop strategic alignments with area hospitals and physician practices, developed a one-call referral center offering a variety of specialty services unique to Iowa and the region., facilitated the development of a comprehensive patient experience program for more than 7,000 Mercy Colleagues, implemented Phase I of a Master Campus Plan to rebuild the hospitals main campus, partnered with Kindred Health for the construction of a 50-bed freestanding inpatient rehabilitation hospital, and helped navigate through a variety of financial and competitive challenges. Guided by a faith-based mission, he also served in previous administrative roles as Division President of Hospital Sisters Health System in Springfield, Illinois; President/CEO of Monongalia Health System in Morgantown, West Virginia; and President/CEO of St. Mary’s Hospital in Waterbury, Connecticut where he started his career in 1987.

Bob and his wife, Mary, reside in Urbandale, and together they have three sons. In addition to spending time with his family, Bob’s interests include running, skiing, golfing and community activities.

In an op-ed to the Globe Gazette, Bob Ritz, Mercy Health Network CEO, shares how Iowans can work together to address the state's workforce challenges.